June 3, 2015 By Matthew Hearne With no comments yet Tagged with: back-to-back, Comrades

For those who have not heard of the race before, Comrades is the oldest and largest annual ultra marathon. There is a huge amount of history related to the race, which was set up in 1921 following the 1st world war. It was the idea of a veteran named Vic Clapham, who wanted to commemorate South African soldiers killed during the war. The race has been run almost every year since, although interestingly enough, black and female runners were not allowed to compete until 1975.

I first heard about Comrades back in 2004, well before running my first ever ultra marathon. At the time, it seemed inconceivable that close to 20,000 runners would want to participate in a hilly 56 mile race. Also, why did everyone also refer to it as a marathon, when it was over twice that distance? It was all very much an intriguing mystery.

Coming from the UK, most people consider the marathon distance to be an immense achievement for any runner. However, out in South Africa, people merely run a marathon to qualify and train for Comrades. Out there, they have a very different understanding of the word ‘tough’, which seems to now adorn so many short distance obstacle races in the UK. 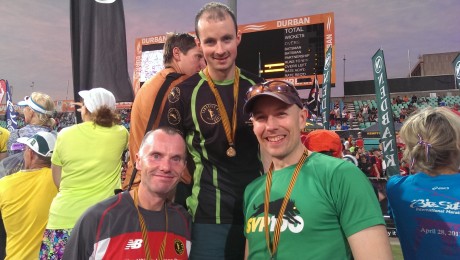 The down run finishes in the Durban cricket stadium

Travelling around South Africa, it’s amazing to discover that pretty much everyone has either run Comrades or knows someone who has. In fact, on landing in Johannesburg this year, I ended up in conversation with a 58 year old on the train into the city. It turned out that he had run Comrades for his first time at the age of 56. He also mentioned that he has run it twice, once in each direction, as “you’ve not really run Comrades until you’ve run both the up and the down”. Indeed, the direction of the race changes annually, providing very different challenges! 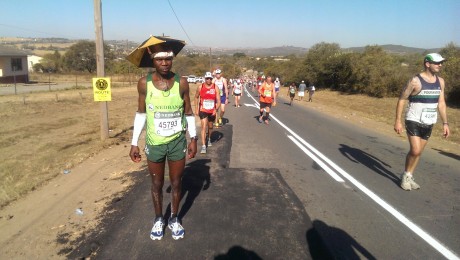 Useful headwear for a sunny day

The trip from the UK to South Africa is pretty long, with direct flights to Johannesburg taking approximately 10-11 hours, with a short flight onward to Durban. However, on the plus side, there is little time difference between the countries, so recovering from the journey is a relatively painless process. Regardless, it’s probably advisable to arrive a number of days before the event in order to acclimatise to the ‘winter’ conditions in Durban, which are very warm and humid.

There are plenty of amazing things you can also do before the race within a short flight from Durban itself. You can visit one of the ‘New Seven Wonders of Nature’, namely Table Mountain in Cape Town, or perhaps take in a safari in Kruger, or how about stretching your legs on the highest bridge bungee in the world (216m high) near Port Elisabeth. Alternatively, you can simply chill out on the beach in Durban itself, watching the rolling waves and surfers, whilst sipping a glass of very reasonably priced wine. 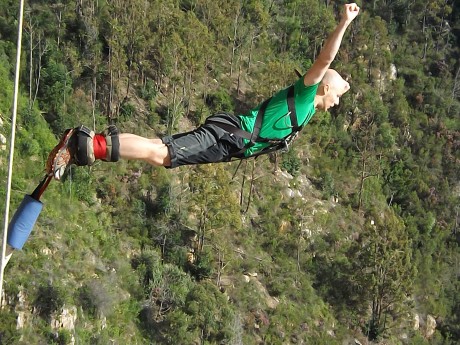 A good way to stretch your legs before the race?

The race itself starts in either Durban or Pietermaritzburg. As mentioned, the direction alternates annually, with ‘Durban to Pietermaritzburg’ being called the ‘up’ and the opposite direction being imaginatively called the ‘down’. Don’t be fooled though, as the downhill route still involves a considerable amount of ascent, and the hard tarmac really makes the decent a challenge in the latter stages, as your shins and quads take a pounding.

The logistics on race day are relatively straightforward. You can stay in either Durban or Pietermaritzburg, and the race organisers put on coaches between the two locations for approximately £4. Given that the race starts at 5:30am, it involves an incredibly early start if you are planning to travel from one location to the other on the morning of the race. You won’t be alone though, as you will join thousands of other nervous runners sleeping on the coaches, storing up every ounce of energy for the battle ahead.

The start of the race is an emotionally charged occasion, as the South Africans sing a traditional song called Shosholoza, before the Chariots of Fire soundtrack in played, the cock crows and the starting gun fires. Unlike many other races, Comrades is actually run according to the gun, and it can take a bit of time to cross the starting line, depending upon your qualification pen, primarily based upon your marathon time. With a strict 12 hour cut off for the race, you really don’t want to be hanging around long at the start, and there are also staged cut offs throughout the race. 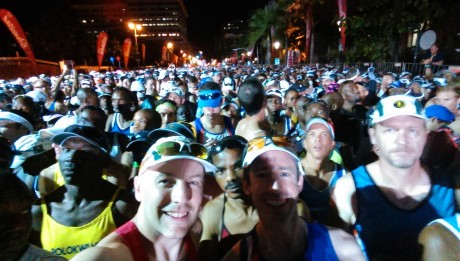 Waiting for the start of the race

If running 55-56 miles within a 12 hour cut off was not hard enough, the races also throws heat and hills into the mix. Over recent years the temperatures have topped 30 degrees, so you need a solid hydration and electrolyte strategy for the journey. Fortunately there are plenty of aid stations along the route, so there are food and drink options almost every mile. You might want to practice running whilst eating bananas and salted potatoes, and drinking iced water and Coke! Almost all the way along the route, the locals sit at the side of the road with their deckchairs, sunshades and braai (BBQs), cheering you on. If you get bored with the taste of energy drinks and water, I’ve heard of runners asking for a sip of beer!

The hills are also infamous, as the route crosses the Valley of a Thousand Hills, and many of them are significant enough to have their own names. Speak to any Comrades veteran about ‘The Big Five’ set of hills and they will no doubt have stories to share. On the uphill route, just when your strength is beginning to fail, you come across a hill outside Pietermaritzburg called Polly Shortts. This innocent sounding hill is brutal, and reduces the majority of the field to a walking pace. Make sure to grab an ice lolly from the aid station at the bottom for the hot climb ahead! 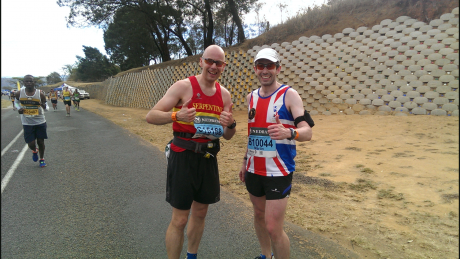 Wall of honour on the Comrades marathon route

In addition to the 12 hour cut off, there are also medal cut offs. Most runners have very little chance of gaining a gold medal, which is reserved for the fastest 10 men and women. Even obtaining a silver medal is an incredible achievement, requiring the distance to be covered in between 6 and 7.5 hours. Fear not, there are many other medals to be earned, such as the bronze and copper medals. Also, all novice runners who run a ‘down’ and an ‘up’ Comrades Marathon back-to-back in subsequent years are awarded a ‘back-to-back’ medal. 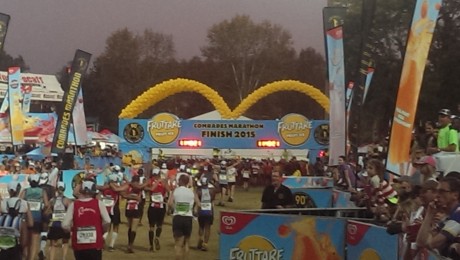 Runners being dragged in ahead of the 12 hour cut off

There are few races in the world where I’ve experienced such powerful crowd participation and emotion. Comrades marathon really is something special, filled with drama, courage and passion, and should be high on the list of any runner keen to test themselves beyond the standard marathon distance. Definitely stay around for the 12 hour cut off, as it’s a truly moving sight to see some of the slower runners hobbling, waddling and limping to the finish line, before the volunteers create a barrier between yourself and the medals. Those who miss the cut off are given a huge round of applause regardless, and will no doubt be planning their return the following year to obtain a place on the finisher list.

If you love long distance running, you really need to add this race to your list, as the whole thing is simply such an amazing experience. It’s not hard to see why many runners continue running the race time and time again. In fact, I saw one gentleman with the number 42 on the corner of his running number, denoting the fact that he had completed the race 42 times. How many other races in the world can claim to have such customer loyalty?! 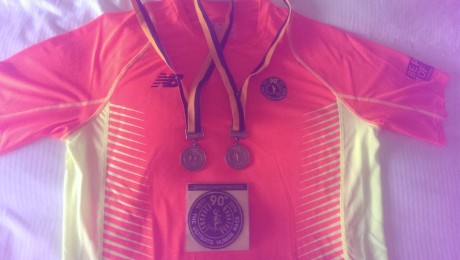 The 2015 finisher medal and back-to-back medal