Blogs about the SVP100 End

October 30, 2014 By Matthew Hearne With no comments yet

This year, a decision was made to hold the SVP100 in August rather than September, as in the previous year runners had ended up battling sodden ploughed field crossing and heavy fog. This was a good decision, as it meant an extra hour of daylight, in addition to much more pleasant running conditions underfoot.

The first 15 miles of the route were marked the evening before the race with the help of Paul Buckle, one of our finishers from 2013, and some of his pals from the Haverhill Running Club. Whilst Paul and the others had fun hanging tape from bushes and spray painting arrows on the floor, we started registering some of the runners in the White Lion pub, where many took the opportunity to enjoy a glass of lemonade, or something a little stronger.

Newmarket, the starting point of the Stour Valley Path and the race itself, can be a very busy town during the month of August. The night before the race, Wet Wet Wet were playing a gig, and many of the hotels and B&Bs in the area had been booked out for months in advance. A few of our runners had taken matters into their own hands and set up camp behind a hedge a short distance from the start line, knowing they could take advantage of the facilities in the pub on the morning of the race.

Fortunately the aforementioned band had no bearing on the weather for race day. The White Lion pub opened shortly after 6am on a lovely morning, and we were already registering runners outside before this time. After mandatory kit checks, registration, and the pre-race briefing, the runners were ready to line up at the starting area, which was a short walk along the road from the pub.

As in 2013, we had two starting times for the runners. Slower runners, or those reliant upon public transport at the other end, were encouraged to start at 7am. Roughly three quarters of runners opted for the earlier start, with the remainder starting at 9am. Both sets of runners headed off promptly at 7am and 9am! 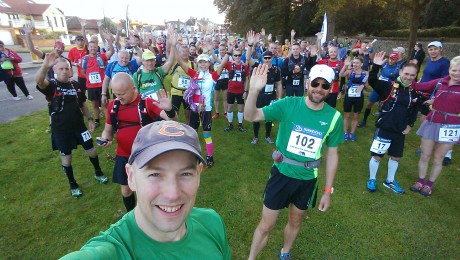 What always surprises me about ultra marathons is the wide range of experience on display at most events. Chatting to other runners during a race, you typically find people ranging from those who run marathons or ultra marathons every weekend, to  those who have never run a marathon before. The SVP100 was certainly no exception, and some entrants had only taken up running a year earlier! As such, I was curious to know how many of our 100 starters were going to actually make it to the finishing area in Brantham. Also, whilst the elevation profile of the course makes it look like a relatively flat route, runners are often surprised by how hilly Essex and Suffolk can be, particularly in the latter stages of the race. It’s certainly a challenging 100km route!

As the race director, I spent much of my time whizzing around the aid stations with my right hand man, Nic Clarke. We were lucky to have a large volunteer pool this year, with friends, family, local running clubs, previous finishers, and entrants recovering from injury, all helping out on the day. A number of runners from my local running club in London, the Serpentine Running Club, had came down to help out, along with some chaps I’d met at the finishing line of Comrades earlier on in the year. My fellow Comrades finishers from the Victoria Park Harriers and Tower Hamlets Athletics Club, had kindly offered to mark up the latter half of the route. They had clearly enjoyed themselves doing so, as they had taken to spray painting cowpats in some of the field crossings, much to the amusement of our runners.

All of the aid stations were very well stocked with a wide range of treats for runners, alongside energy products from High5. We work on the basis that it’s better to have too much rather than too little, as it can be very demoralizing for runners to turn up at an aid station, only to find out that they have run out of something. I’ve been in races before where I’ve spent many miles dreaming of certain sugary fizzy drinks, only to find out that the last bottle had been polished off moments before I arrived. These small things can really hit you hard, particularly later on in long distance races. 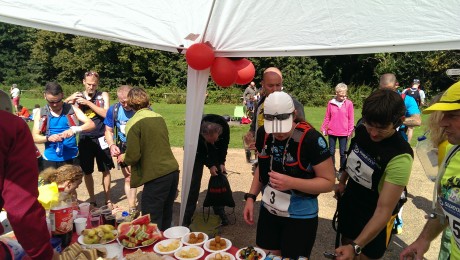 We have a Facebook community page set up for our runners, volunteers and supporters. One of the consistent pieces of feedback we received after the race related to how much the runners enjoyed the atmosphere at the aid stations. Having visited most of them myself during the race, it was clear to see why. All of the volunteers were friendly, enthusiastic, and very helpful.  One of the aid stations was described as a Formula 1 pit stop, where the runners were guided into the checkpoint, bottles / bladders were taken and filled, and food requirements were fulfilled with maximum efficiency. 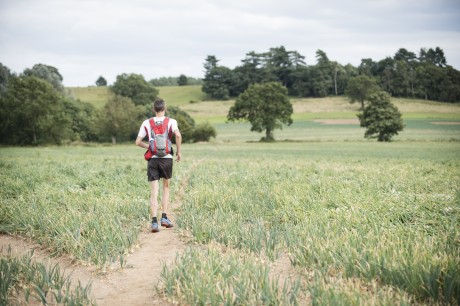 Whilst the runners were working hard at covering the distance, Nic and myself set off towards the finishing area. This year, we had decided to finish the race at the Brantham Leisure Centre, which is a short distance from the actual end of the Stour Valley Path. We worked upon the assumption that runners would not mind covering the additional 400m to reach a venue that had hot food, hot showers, and a licensed bar! The leisure centre has a football pitch, which meant that the final 100m dash was floodlight later on in the evening. We were sharing the venue with a birthday party, which had booked the upper floor of the leisure centre. This meant that runners would see disco lights and hear 80s classics blaring out as they approached finish! It actually created quite a party atmosphere, so there was plenty to keep the volunteers and supporters occupied while they waited.

2013 had been the inaugural year for the event, and it had been won by a local runner called Chris Spurling, in a time of 10hrs 17mins. This was a great time for the route, but we expected a slightly faster time this year due to the slightly more favourable conditions underfoot. 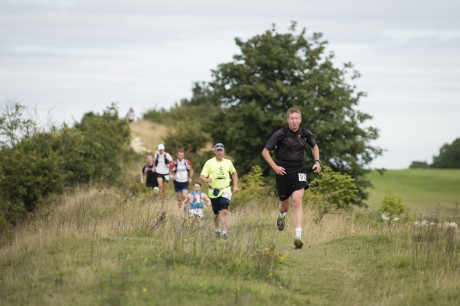 Ultimately the race was won by Daniel Hendriksen (see photo above), arriving home in a time of 9hrs 38mins. Daniel won himself a pair of Hoka shoes, courtesy of the UltraMarathonRunning Store, alongside a trophy, t-shirt and medal. The first female home was Michelle Gordon in a total time of 12hrs 38mins, which took almost an hour off the winning female time from the previous year. The winning times from this year and last prove that it’s possible to run a relatively fast 100km on this point to point route, for those looking to qualify for Spartathlon.

75% of our runners made it to the finishing line safely, where they were rewarded with a finishers t-shirt, medal and some hot food. The crew at the finishing line did an excellent job of reuniting runners with their bags, guiding them towards the changing facilities, and making sure that ever runner had access to food and drinks. Our final runners came in after approximately 16 hours, guided by the sweeper, who had done a fantastic job of picking up lost runners, markings and glow sticks along the route. Everyone was safe and accounted for, much to my relief. We only had one casualty from the race, a runner who had perhaps consumed too much water, and was taken to the local hospital by St. John Ambulance. As always, St. John Ambulance had done a great job of ensuring the safety of the runners, and fortunately the runner was safely discharged following a checkup.

All in all, it was fantastic to receive such positive feedback from everyone following the event. Runners, volunteers and supporters had thoroughly enjoyed their day out in the countryside, and we have already had a number of finishers sign up for the event next year. We look forward to seeing new and returning runners in 2015!